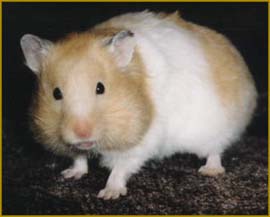 The ubiquitous little hamster, one animal you will find in almost any pet store, has brought joy to millions with its amusing antics, affable nature and cute-as-a-button physical appeal. It's the perfect pet for people who don't have much room, for children wanting a first companion animal, and for anyone who simply wants a wonderful little cuddly friend.

The hamster's story is unique. It is native to the arid Middle East, primarily in the country of Syria, where the tiny animals weren't given much thought for thousands of years. And so it might have remained if not for a brood of wild hamsters that ended up in the possession of a doctor in Jerusalem who embarked on a conscientious breeding program in the early 1930s. Offspring from this brood were shipped to many different countries, including the United Kingdom and the U.S., where they were initially utilized for medical research. But as familiarity with the animals grew, their pet quality was soon recognized.

It is suspected that all Syrian/Golden type pet hamsters alive today are descended from that original wild hamster brood in Jerusalem. Perhaps so, though their offspring have evolved into a dazzling array of colors, and even different shapes and sizes.

The name "hamster" supposedly stems from the German word hamstern, which means to store, or to hoard. Of course, anyone who knows hamsters knows they are champion hoarders, capable of filling their cheek pouches until it seems they will burst. This is a very handy adaptation for wild hamsters who must roam far and wide in a sparse desert environment to find food. Pet hamsters don't really have to worry about stocking up their burrows, but they keep in practice nonetheless... to the delight of their human keepers.

There are two general types of pet hamsters. The most common is a form of the original Syrian or "Golden" hamster. This animal can be up to five inches long and comes in many colorations and coat types. They can have relatively short hair, long hair or even wavy hair. A distinct species is called the "Dwarf" hamster, or sometimes "Russian Dwarf" hamster. These guys are much smaller (sometimes just half the size of their hamster cousins), and typically have a brownish-gray short-haired coat with a distinctive dark stripe down the center of their back.

In addition to the pronouced size difference, some personality differences have been noted between the two primary types of hamsters. Dwarfs seem to be a bit more laid back and milder mannered. They also get along somewhat better with cagemates than do the goldens, typically. The golden variety is best kept as a solitary pet, though it is possible to keep two or more together especially if they are introduced at a young age. Same sex pairs can also do OK on occasion. Dwarf hamsters can be kept as solitary pets, or can be carefully paired up with another of the same type. Putting a dwarf hamster in the same cage with a golden type is never advised. Nor should hamsters be kept with gerbils, mice, rats or other rodents.

Pairing hamsters as cagemates can be very tricky, and one must pay strict attention to ensure that they do not fight, injure or perhaps even kill their cagemate. The best bet is probably to keep a single hamster. It will be quite happy if it has an adequate living/play area, a few toys, running wheel and other diversions, and receives some quality time every day interacting with its human keeper.

Hamsters should not be kept in tiny enclosures. They are active little guys, and need room to explore, run and exercise. Indeed, exercise is critical to their physical health and mental/emotional well-being. Using rocks, sticks and cardboard tubes, it's easy to set up a little obstacle course and jungle gym for their enjoyment inside their cage. Just make sure none of these items can fall on your hamster, and be careful not to provide insecticide-treated wood. Every hamster should be provided with a running wheel, which will become a favorite activity. The cage environment should also include hiding and nest areas. Hamsters are burrowing animals and need to feel as if they are secure in their private hideaway.

The enclosure will be your hamster's entire world, so it is critically important that it not be a small, empty and dull world, but one that is filled with possibilities and things to do.

Being nocturnal animals, hamsters will be most active at night, while spending most of the day snoozing in its secret hideaway. For this reason it might be best to keep the hamster cage in a den, study or family room, not a bedroom where midnight wheel running can be quite a noisy nuisance.

Commercially-prepared pellet and seed mixes can serve as a good staple diet for your hamster. However, this diet should be supplemented frequently with other foods and treats. Alfalfa or timothy hay should be offered occasionally, along with a dried vegetable mix. Treats such as raisins, carrots, potatoes, apple, can be offered sparingly. Leafy greens such as lettuce should probably be avoided. Hamsters will eat it but may wind up with digestive problems. Citrus fruits are also best left off the hamster menu. Hamsters are not prone to overeat, but will hide away a portion of excess food for consumption later on. Therefore, foods that will not readily spoil are most suitable.

Fresh water should be provided to hamsters from hanging tube-type dispensers, not from free-standing water dishes.

Like most rodents, hamsters will bite, and they are certainly capable of drawing blood... though most hamster nips don't break the skin and are simply a warning to leave them alone. Most hamster nips result from being suddenly startled or grabbed. Hamster handlers must keep in mind that in their original environment, hamsters would never have been grabbed by anything that wasn't a deadly enemy. So it is only natural that they are alarmed by being snatched up by someone.

The more a hamster is handled, the more tame it will become... and those that learn to associate the human hand with treats and fun activities will become quite tame, indeed. It is best to handle hamsters very gently, scooping them up and cradling them in the palms of your hands. Experienced hamster handlers learn how to hold their pet without exerting any force upon it. Hamsters should never be picked up by the scruff of their neck or by any appendage.

When taking a hamster out of its cage to play and interact with its human caretaker, some precautions need to be kept in mind. Hamsters can't see very well and they are not the most agile and sure-footed of critters, so they might easily fall off tables and counters, possibly seriously injuring themselves. They definitely should not be allowed to run loose on the floor fot they might be inadvertently stepped on or quickly disappear behind a piece of furniture or an appliance, and be difficult to recover. Plastic balls which allow hamsters to run all around without really being loose are excellent exercise options. Hamsters should never be allowed in the vicinity of dogs or cats. One swift bite or swipe of a claw could be the end of the hamster.

Hamsters make ideal pets for children, and can be the perfect critter to introduce them to the joys and responsibilities of pet-care. Yet children should always be supervised when around hamsters, and handling should probably be kept to a bare minimum... if allowed at all. Kids are prone to drop or otherwise injure small animals. Be very alert to possible disasters when children and small animals mix.

Unfortunately, hamsters do not live very long. A three-year old hamster is a rarity. The normal life span is about two and a half years, though many pet hamsters don't make it that long because of poor pet husbandry practices.

Perhaps the biggest threat to every pet hamster is keeper negligence. Because hamsters are so often a first pet, they are also subject to this all too common malady. Everyone is excited about a brand new pet, but a few weeks or months later the pet is often taken for granted or virtually forgotten altogether. When this happens it is a real shame. Hamsters may be little but they are still deserving of love and attention from whoever has made the decision to bring them home.

Because of their size and affordability, hamsters are an obvious choice for first-timers, yet they are certainly not just for children or neophyte pet-keepers. There are hamster enthusiasts the world over who collect, breed, study and love these little gems strictly because they are such wonderful animals. Cute, cuddly and packed with personality, hamsters are sure to continue "hoarding" a big share of popularity in the world of pets.

Hamster owners and breeders... tell us about your pets. E-mail rustyh@petstation.com

THANKS FOR VISITING CRITTERSTATION'S "BREED SHOWCASE"